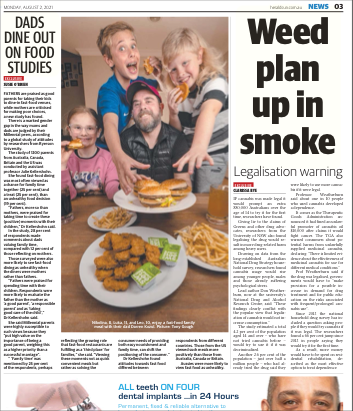 IF cannabis was made legal it would prompt an extra 880,000 Australians over the age of 14 to try it for the first time, researchers have found.

Giving lie to the claims of Greens and other drug advocates , researchers from the University of NSW also found legalising the drug would result in more drug-related harm among heavy users.

Lead author Don Weatherburn , now at the university’s National Drug and Alcohol Research Centre, said: “These findings clearly conflict with the popular view that legalisation of cannabis would not increase consumption.”

The study estimated a total 4.2 per cent of the population aged 14 and over – who have not tried cannabis before – would try to use it if it was decriminalised.

Another 2.6 per cent of the population – just over half a million people – who had already tried the drug said they were likely to use more cannabis if it were legal.

Professor Weatherburn said about one in 10 people who used cannabis developed a dependence.

It comes as the Therapeutic Goods Administration announced it had fined an unlawful promoter of cannabis oil $10,000 after claims it would fight cancer. The TGA also warned consumers about potential harms from unlawfully supplied medicinal cannabis, declaring: “There is limited evidence about the effectiveness of medicinal cannabis for use for different medical conditions.”

Prof Weatherburn said if the drug was legalised, governments would have to “make provision for a possible increase in demand for drug treatment and for public education on the risks associated with frequent/prolonged cannabis use” .

Since 2013 the national household drug survey has included a question asking people if they would try cannabis if it was legal. The researchers found a 66 per cent jump since 2013 in people saying they would try it for the first time.

As a result, more money would have to be spent on residential rehabilitation, described as the most effective option to treat dependence.